My experiences with ESP8266 development

For some weeks ago, I bought some ESP8266-12E modules with developer boards and started developing IoT-test solutions. I also have some other dev-boards like Intel Edison or Arduino, so why to change to another?
The reason is, the Edison is much far away from being “atomic” (I mean, it has a complete yocto linux installed and therefor more features running, than I need). My Arduino Uno comes without WiFi and buying a Shield is expensive compared to ESP. For simple prototyping or home automation tasks for my own, it is sufficient. So, a neat little device, that can “concentrate” on its tasks is, what I want.
Often I am loosing time on fighting around with Edisons “complexity” and OS. With ESP I can go forward by only coding and HW development. There are no service, that can interrupt work.

At first, I tried to find a way to start development. So, I looked around to find some useful sites, that can bring me up. I realized, that there are thousands of How-Tos and “Getting started” Guides. My starting point was a development platform called PlatformIO (http://platformio.org/). It is really easy, to write code and “deploy” it to the borad. Because I love developing software with C#, I am a little bit lazy, to start coding with C/C++. After installing PlatformIO and getting started, I found some simple example codes written in LUA. And because I was not experienced in writing LUA-Code, I decided to start with it. LUA-Script is pretty simple and easy to learn, but after a while, I found, that it consumes much resources of the ESP and I was not right convinced about the language features, therefor I changed to Javascript.

Esprino is a firmware, that enables Javascript development for the ESP. It brings a Web interface, where you can write your code and start it immediately. Also you have the possibility, to Upload the whole prepared firmware. For my purposes, it was not what I want and like to deal with. So, I switched to the next development experiences. Arduino IDE!

I am familiar with Arduino IDE and developing with C/C++. Also the reasons I wrote before, lead me to the conclusion, that this way of writing code for ESP is an adequate way, although it is not that comfortable to write code with Arduino IDE. The IDE has no OOB support for writing for ESP8266, but setup of that IDE is pretty simple. You have to add the ESP-Package-URL to the preferences for the board manager (for example: https://adafruit.github.io/arduino-board-index/package_adafruit_index.json,http://arduino.esp8266.com/stable/package_esp8266com_index.json). After setting up, I could start coding as I would normally write code for my Arduino. But after some hours of fiddling and try-error procedures, I switched to VSCode.

Working with VSCode and Arduino

For the first few days I could go with that solution – Coding in VSCode (with additional extensions like clang, C/Cpp,…) and building/uploading than with Arduino IDE. But as one can imagin, this smells and therefor cries for a better solution.
I found a nice solution for setting VSCode up to support Arduino; you can find this great article here. But I also created a PS script, that automates the setup process a little bit.

It checks, if a local folder “VisualStudioCodeArduino” exists. In case it doesn’t its clones the files from Fabien’s Git repo and copies all necessary files to their destinations. After running that script I can start calling code . in PS. With that I can start coding in VSCode and also run a build and deploy from the tasks. It really runs fine and it feels like a charm. So with that script and base code, that could be used as a starting point I put all in my GitHub repo here. With that Setup, I am able to get quickly ready for dev.

Please feel free, to modify the script or give comments of youre experiences. 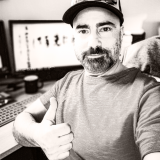